To all my friends and followers in Detroit and Hamtramck, Public Pool is opening their show “The Last Record Shop” tonite, Sept. 6th at 7pm. The exhibition will be open Sept. 7th thru Oct. 18th.

The Last Record Shop is a show for which different artist designed record covers of imaginary bands and songtitles. My band is called Lorem Ipsum and has its roots in the Monolog-Project which I will be showing at Guck mal, Guenther in Switzerland in two weeks.

Watch out for the Sonic Stroker, the dude is amazing. Maybe he will even manage to get his website runing in time. Then again, he’s the Dude.

In late October I found a stack of records on a tag sale in Old Saybrook for a quarter a piece. I went through them looking for bands/songs/album titles fitting for postcards. I found a quite niece one for my little Princes Ida: The Platters: My Old Flame (here on youtube for most of the world outside of Germany to hear). I had never heard of neither band nor song before.

At first, as with many other postcards during that week, I had used a piece USPS Priority Mail label # 228 as the address label pasted over the whole in the middle of the record. At the post office I was told I had to replace or cover the label if I wanted to avoid having to pay for priority shipping (which would have been over USD 40) although the Priority Mail Logo could not be seen. In the first two pictures you can still see the record with the original label: 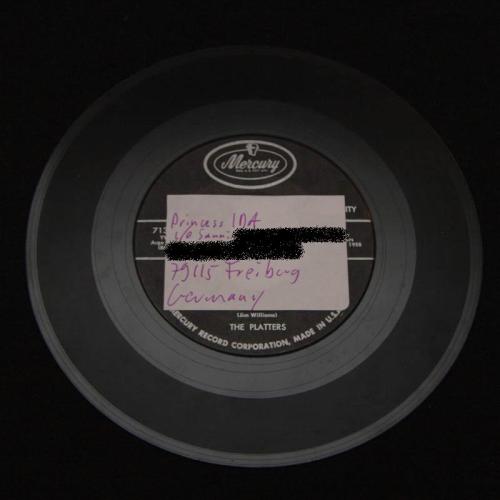 Yesterday I went to see Princess Ida and her parents and got to see the Postcard after shipping. Three unusual changes had occured:

I forgot to ask Princess Ida whether the postcard had been wrapped by either mail service in the classic “we’re sorry, but we think we might have damaged your mail”. (German Mail bureaucrats created a special word for this: “Nachverpackung”). Not that she would have known;-)